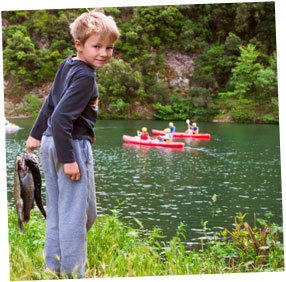 Lower Baker Dam
Completed in 1925 and raised to 293 feet in 1927, it was the highest hydroelectric dam in the world at that time.

Washington Portland Cement Plant Site
Concrete’s first cement plant, constructed in 1905. At that time, the community east of the Baker River was called “Cement City”. A limestone quarry is over the hill to the north.

Concrete Theatre
Built in 1923, its stage has entertained audiences from vaudeville to the movies. It is listed on the State Registry of Historic Sites. Currently open and operating.

Town Hall And Library
Built in 1908, this building was Concrete’s first schoolhouse, originally located across from the State Bank of Concrete.

Henry Thompson Bridge
Built in 1916-1918, it was named for the Skagit County Commissioner who promoted its construction. At the time, its graceful arch was the longest single-span cement bridge in the world, and is listed on the National Historic Register.